Top 10 Projects of the Decade

The last decade was full of exciting projects which we were proud to have been a part of. There were so many, we wouldn’t even know where to begin counting!

WJ Group provide Water Management expertise across the globe, offering a full design, installation and maintenance service depending on your requirements.

In the last decade, WJ Group opened office bases in:

Our head office moved down the road from our previous office in Bushey, to Kings Langley in order to keep up with the growth of our UK Operations. We also purchased a larger unit in Nottinghamshire (Bilsthorpe), which provides more space to be able to complete routine and essential maintenance, testing and storage of our fleet of equipment, as well as adding more office space and training facilities for our staff members.

Among all the office openings, we completed a shed load of projects, all of which we’re immensely proud of. It was incredibly hard to choose our favourites, so instead, we’ve selected ones which stick out in our memory. 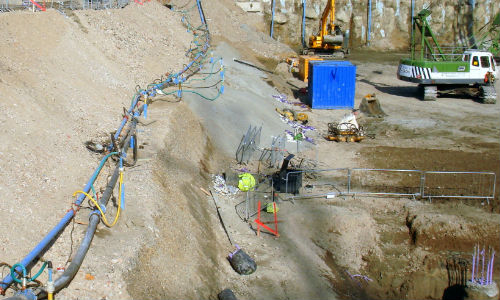 The decade kicked off with an almighty flourish, as the UK (London more specifically) was preparing for the Olympic Games in 2012. WJ UK were contracted to supply an ejector system for the London Olympic Aquatic Centre.

The system was in place to assist with the completion of the 5m deep diving pool. Since the London 2012 Olympics, the aquatics centre is used for the general public, and still houses all three pools (competition, training and diving). 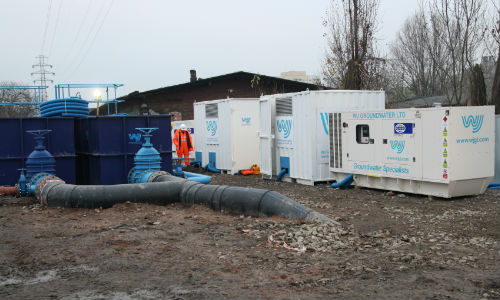 Meanwhile in Poland, work was commencing on the Lodz High Speed Rail Interchange, which would connect high-speed, long-distance and regional rail lines, plus local and inter-city bus services. 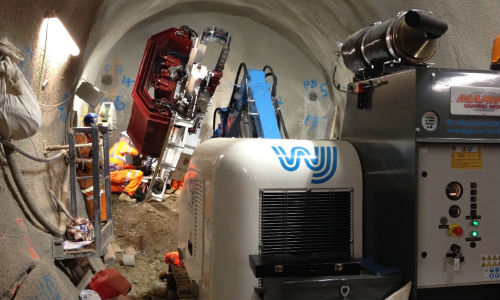 The Crossrail project in London was given the green light back in 2008 and is currently Europe’s largest infrastructure project. It stretches more than 100km from Reading and Heathrow in the West, through to Shenfield and Abbey Wood in the East of the City.

WJ UK relished the challenge presented to them, which meant working around an already busy transport hub in Farringdon Station. In-tunnel probe drilling and depressurisation using vacuum wellpoints or passive relief wells were implemented in order to work around the cohesive clay, and intermittent sand horizons and channels. 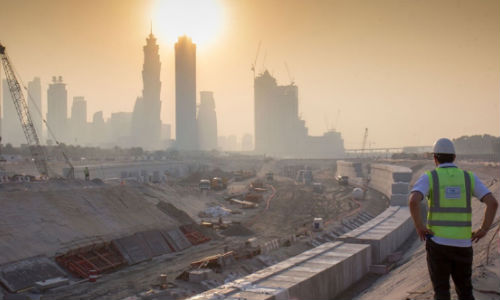 Everyone knows that Dubai don’t do things by half! And that certainly was the case with the Water Canal Extensions in 2013. The canal is a 3km long extension from Business Bay, and out to the Arabian Gulf.

In order to complete these works, the canal needed to pass under the Sheik Zayed Road, through Safa Park and under two more main roads before reaching the Gulf. Many competitors were adamant that internal wells would be required to reach the required drawdown due to the width of it in places. However, using computer design and modelling, plus pumping tests, WJ Middle East were able to dry out the canal using only exterior deepwells. 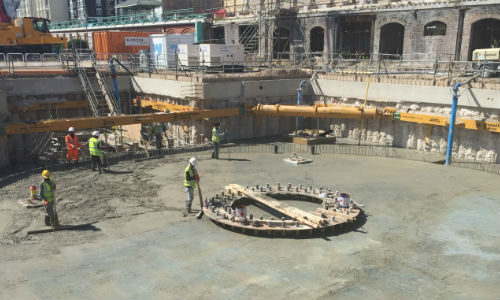 From the vision of the architects who saw the London Eye come to life, the Brighton i360 provides a similar, but also very different approach. Think of the London Eye, flipped on its side and suspended 162m above the Brighton seafront.

Excavation and data logging were required, and WJ UK were on hand to provide this, alongside the construction of secant bored piled walls. Due to the location on the seafront, the challenge was to achieve the necessary drawdown within tidally variable groundwater levels. This meant installing nine deep wells via cable percussion drilling through underlying chalk, plus using a data logging system equipped with a call-out alarm to effectively monitor discharge flows within limits. 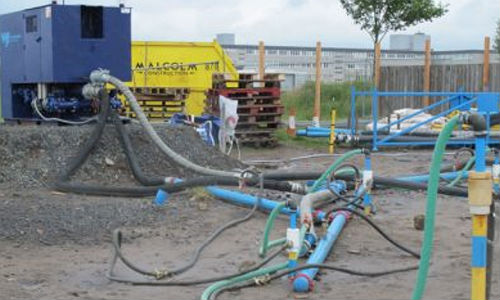 Just on the outskirts of Glasgow, this award-winning project at Renfrew saw WJ UK appointed by COWI UK to work with Morrison Utilities and Scottish Water to install a dewatering system to enable the construction of a 20m (diameter) shaft. An existing foul sewer had received some damage back in 2013, and the task of rectifying this would be complicated.

The issue with the existing sewer was due to ground settlement, so the dewatering for this project was to induce settlement within the silty sands in the area – an approach which is rarely used in the UK. Low permeability of the area meant we used an ejector dewatering system, using 10no ejector wells (up to 17m depth) and 2no ejector wells up to 12m depth.

The project was recognised at the Ground Engineering Awards and was awarded “UK project with a Geotechnical Value up to £1mil” in July 2017. 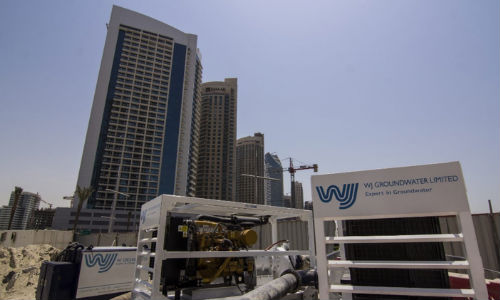 The world’s tallest building stood proud over two of our diesel sewage pumps as Dutco Balfour Beatty LLC completed the hire of them for a sewage overpumping system in downtown Dubai. Combined, the pumps have a pumping capacity of 600l/s

WJ Middle East have many pumps available to rent, and are proud to provide our clients with fuel efficient, sustainable and reliable pumps, settlement tanks and also drilling rigs for projects when needed. 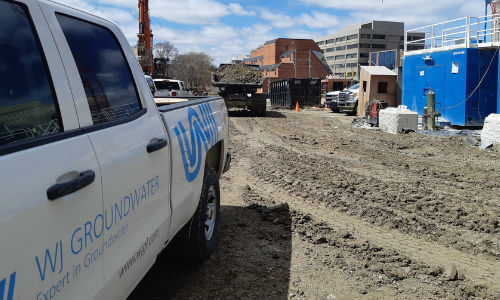 This project, designed and constructed by Crosslinx Transit Solutions Contractors (Crosslinx), spans across 19.7km, linking Mount Dennis to Kennedy across Eglinton Avenue, with 10km being underground. Construction for a new station was required, plus a crossover structure needed to be in place, with main and secondary entrances.

To create the new station and crossover, WJ Canada were required to use sequential excavation techniques which had support provided by sprayed concrete lining, with the entrances being created via open cut method.

The full project is set to be completed in 2021. 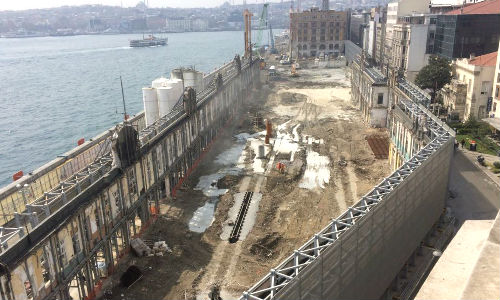 The Galataport project in Turkey is a $700m development of a new port development, which will see a new cruise passenger terminal constructed alongside a redevelopment of the area of Tophane Square.

The project was split in to two due to the size, and the focus of this roundup is on the Karakoy portion. Although the smaller half of the project, it required a bespoke sump pumping system (which started in Feb 2018) to allow new basements to be constructed underneath existing buildings, showcasing WJ Turkey’s flexibility in challenging projects. 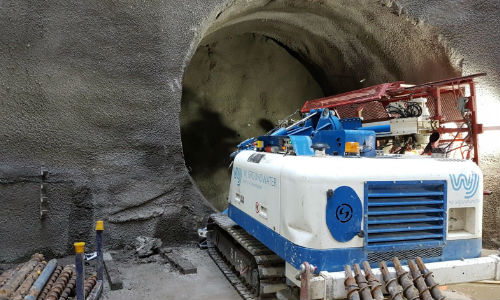 Thames Tideway is the project responsible for London’s new ‘super sewer’, which will spread over 25km under the River Thames. WJ UK has been involved in many stages of the project, flexing our muscles in pumping tests, dewatering, and now in-tunnel probing.

For the stretch of tunnel connecting Kings George’s Park in Wandsworth, to the Carnwath Road on the north bank of the Thames near Fulham, probing was needed before each advancement of the tunnel to collect geological samples. With our vast experience of in-tunnel probing and drilling, we were well equipped for the task in hand.

The whole Thames Tideway project has been a great success for us over the past couple of years. Being able to provide our expertise in such an important project for the future of London has been an honour, and a project which brings our decade roundup to a close.

The variety and scale of projects we’ve worked on over the last 10 years has been testament to the work that our team has put in together. Without this hard work, we couldn’t ever imagine the growth that we’ve seen across the world, and every single person has contributed to that growth. With continued levels of enthusiasm, who knows where we will be in our next decade roundup!

If you’re reading this and have any projects you’re working on and require experts in water management, look no further as we’re always keen to help, talk and assist with your every need. To get in contact, scroll to the bottom of this page and click “Contact Us” to submit a form. We look forward to hearing from you!